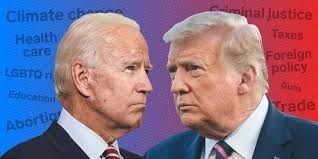 1 Thing you can do with your Investments to help Survive the Elections!

The “Questions” we are getting

Also, I heard the same things in 2016, just change Joe Biden’s name for Hillary Clinton and change reelected to elected for President Trump. We all have political beliefs and should vote to further what we view as our preferred future for the United States, but what you should not do is let your political viewpoint sway your investment decisions.

Our answers to these questions

Regardless of your politics, if you are a long-term investor in the U.S. Stock market, you are betting on American business not Republican or Democrats. American business owners have shown to be resilient and make money regardless of which party is in power and regardless of what policies and regulations each respective party puts forth. I usually propose these questions to those that are fearful in an election year.

Do you believe that Coca-Cola or Apple or Wal-Mart will hold an emergency board of directors’ meetings post-election to discuss the results?

Do you think Coca-Cola will sell more or less Coke because of who is elected president?

Instinctively, every person I have asked these two questions to will say "no, they won't have that meeting" and "the amount of Coke sold is not dependent on the president." My question after those responses is, then why do you think you should be making major emergency changes to the companies you own because of the election?

There are major themes of each to be aware of and tweaks to make to your portfolio due to the elections. For example, President Trump has favored tariffs and theoretically the U.S. economy should have a climate for growth that is greater than foreign markets so you may want to reduce exposure to foreign markets if he is reelected.  Conversely, Joe Biden has favored eliminating tariffs and supporting trade agreements which should have a climate that brings more opportunities to foreign markets and you may want to increase exposure to foreign markets. If you do either of these they should be done because you know the election results and done because of how you believe long term rationale views of that presidents’ policies and the effect on markets relate to your long-term financial goals, not short-term emotional decisions.

It's also important to remember that the President is only one person and we have three branches of Government for checks and balances. Every president in my lifetime has promised to change the government to become more extreme Left or Right on the campaign trail but the reality of the great system our founders created is, they have left office leaving the government fairly centrist from political science academic's viewpoints.

A look at the data 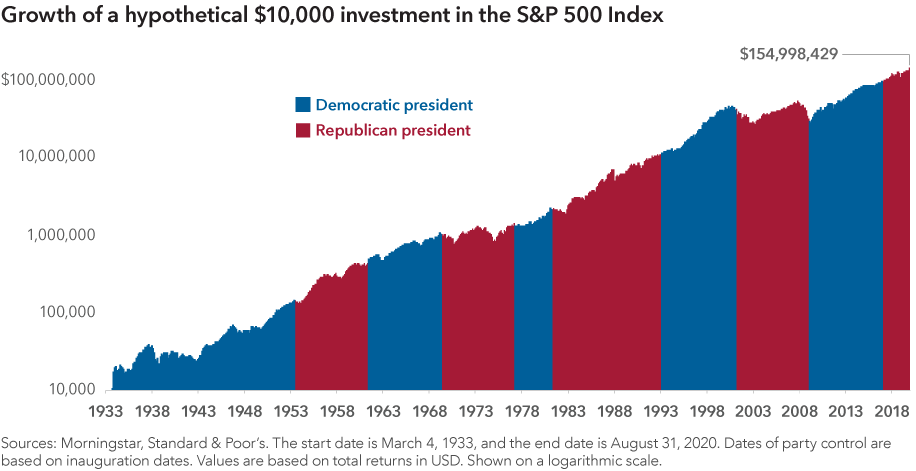 The S&P 500 index is unmanaged and you cannot directly invest into an index. Past performance is not a guarantee of future results.

2. This chart from Fidelity further highlights that stock markets have done well under Democrats and Republicans. All scenarios have a positive average with the Democrats slightly beating Republican records. It should be noted that dot com boom under President Clinton is an outlier of data that does tilt the charts however is part of the historical data. 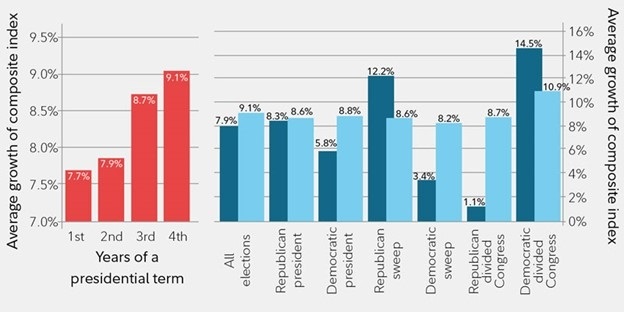 Indexes are unmanaged and you cannot directly invest into an index. Past performance is not a guarantee of future results.

3.This chart from the capital group shows what could have happened if you were emotional and pulled your investments out in an election year due to fear. 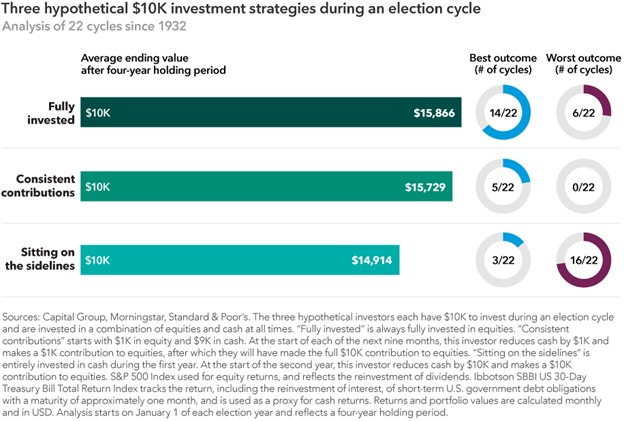 These hypothetical examples are for illustration purposes only and not intended to be representative of actual results or any specific investments. The determinations made by these examples are not guarantees or projections, and no taxes or fees/expenses are included in the calculations which would reduce the figures shown. Please keep in mind that it is possible to lose money by investing and actual results will vary.

This year is different

This year has been one to remember between the COVID-19 pandemic and social unrest but in the words of King Solomon, there is nothing new under the sun. We have seen tough times before and we will see them again. We have seen politically divided times and we have been as fearful as we are now. We used to have presidential candidates duel, we have seen major world wars and yes, even a pandemic before. This year is unique as all are but with long-term investing this will be just one year of data.

1 Thing you can do to survive this election

If you are struggling to keep your emotions out of your investment decisions, it may be time to seek professional help. At Beratung Advisors, we seek to listen to you and understand your goals to help you build a customized financial plan and then invest your money based on your plan and your goals. Give us a call today at 412-357-2002 to get started.

This material represents an assessment of the market environment at a specific point in time and is not intended to be a forecast of future events or a guarantee of future results. The information is based on data gathered from what we believe are reliable sources. It is not guaranteed by Waddell & Reed, Inc. as to the accuracy and is not intended to be used as the basis for any investment decisions. The information presented does not constitute a solicitation for the purchase or sale of any security and is not a recommendation of any kind. Please consult your financial advisor before making financial decisions. (10/20)