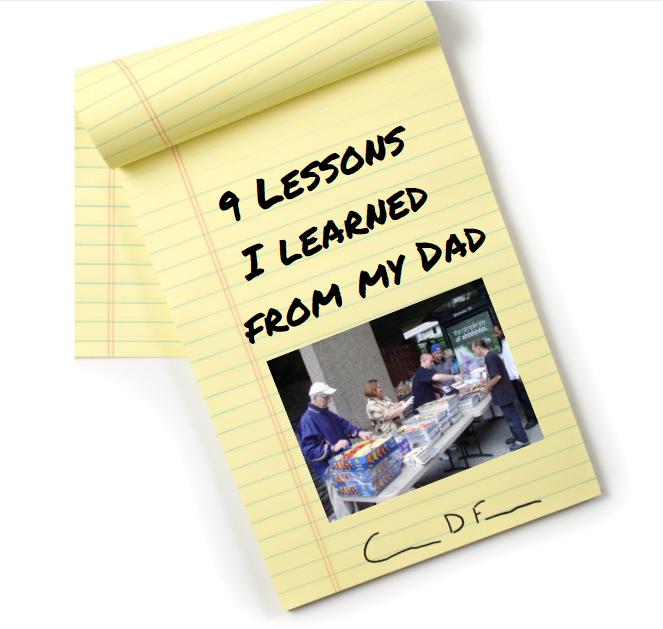 9 Lessons I learned from my Dad

9 Lessons I learned from my Dad

My father was called home to be with God 9 years ago on Thanksgiving Day, November 24th, 2011. Today would have been his 72nd birthday. There is not a day that goes by that I do not think of my dad. In his memory I wanted to share the 9 most important lessons he taught me, one for each year he has not been with me.

All these lessons were not just taught to me by words alone, but primarily by actions. My father lived his life boldly for all to see and left an impression on people (sometimes good and sometimes bad) because his actions always spoke louder than his words! I believe in life more is caught than taught, so I wish I had videos of my dad acting these out for this post, but words will have to substitute for actions.

My dad was well known for his famous/infamous “Yellow Tablets” that he carried with him at all times and took notes with at all times, which was an 8 ½ x 11 legal pad. This was such a part of him, that multiple people placed them in his casket during his viewing. Just about anyone that knew my dad had a yellow table story and many were shared at his funeral. My favorite is when Pastor Frank finally learned he was not always just taking notes about his sermon when “scribbling” on his tablet during church. What did he write down? Everything! It could be what he was thinking, to do lists, or observations, but what he used it for most was to write down what he learned about people so he could remember them and get to know them. I read a few of these notes on myself when he passed and some made me laugh, some made me cry, some made me smile, but they were all accurate. I use a white tablet instead of a yellow one and increasingly using the Evernote app to replace that, but I still take notes all the time and about just about everything that comes to my mind. Grab a tablet or use your phone but start taking notes today.

Among the many quirky sayings my father had, his most used might have been his phrase “smarter than a rat.” This is the term my Dad would use when he did things other did not do. For example, if everyone goes to eat at 6:30 PM and waits in line you should go at 5:30 or 8:30 PM to avoid the crowds and hence, being smarter than a rat. His point was the masses do a lot of things the same way, not always for the better. In your life, do things differently than others to avoid having the same results. I try to be smarter than a rat by observing what people do then learning the why behind it. Sometimes we do things a certain way just because others do it, not because it is the best way or the right way for us.  Do something against the trends today and live your life, not other’s!

My father did not distinguish where his work life, community involvement and family life started or stopped. My father spent time in our lives by coaching sports, taking family vacations and the usual things you expect from a loving and involved father, but it’s the other side of this that impacted me and I hope to do for my children. He made us involved in his life. My dad would take me to business meetings. As he served as an elected official and had meetings, instead of not seeing me at night he took me to the meetings with him. If he had a Kiwanis club breakfast meeting, networking meeting or church board meeting, he would bring me along. This would then allow me to see what it was he did and how he did it. It’s no wonder that I ended up becoming the same elected official, served on church boards, and started my own company because he modeled that life to me. Furthermore, he would explain to me on the way to these meetings why he attended them and what impact they would have. He also would give me the play by play of how to work with people when we left those meetings. Model the life you want your children to live by having them be involved in your life.

4. Be a Full Time Student at Automobile University

We would take an annual family trip to Disney World every December. This involved an over 15-hour road trip. For the entire trip, my Dad would be playing audio books (the old cassette versions) of leadership and self-development books. His favorite was always Zig Ziglar. Zig coined the term “Automobile University,” which he would tell his 4 children below the age of 16 about as we complained about listening to another book. Zig would famously say, if the average commute is 30 minutes both ways, at 5 days a week, within 3 years you could have the equivalent of an associate degree of information just by listening to audio books.

It became so engrained into our childhood that when my brother Jason and I took a road trip to Michigan, we stopped at the bookstore (it was a long time ago before Audible on the phone) to pick our an audio book to listen to on the way there. I have taken this lesson into more than just the commute - you can do this while running, doing laundry, cleaning the house, shopping, and just about any other mundane task. I am able to consume 4-6 books monthly by taking this lesson to heart. Try it, knowledge is power!

People always tell me stories about how much my dad cared about them. He was never one to not tell you that you matter and say good things to you and good things about you to others.

He was a big fan of handwritten thank you cards (even though you could not read his scribbling) and people always appreciated the thought behind them.

The other way he showed his gratitude was through gifts. He was famous for buying The Entertainment coupon books in bulk and then carrying them in his trunk to hand out as gifts. He would later do this with day old bagel from our bagel shops and eventually buying prewrapped gift sets from China that reminded me of Santa’s workshop gifts from elementary school. It did not matter that his gifts were often weird and quirky it showed people how much he cared about them and appreciated them.

Another thing that my dad did to show his gratitude to others for just being in his life was to show he was always thinking of them. One of the best ways he did this was by clipping newspaper articles. He subscribed to over 7 newspapers and by the end of the day they would look like swiss cheese as he ripped (never used scissors just rough tears) out any article that made him think of someone and then he would either give it to that person or send it to them. These did not always make sense why it made him think of that person and sometimes they were an article about that person or a wedding announcement. You may think that person already knows their wedding announcement is in there, and they probably bought 15 copies if the article is about them, but still getting that in the mail shows someone you thought of them and you are grateful for them.

I have made handwritten thank you notes a cornerstone of the way I show my gratitude and use the power of gifts as well and I may not “rip” articles from a paper newspaper but I still send out a lot of links to people with articles that make me think of them.  Show your gratitude to someone today, it doesn’t have to be a grand gesture, just reach out!

You always knew what my dad liked for two reasons. First, he would be so passionate about it that it oozed off him and second he would tell you. His zeal for things in life became contagious. If he had a great meal, he would let everyone know about that place and not just let you know, he would invite you there and pay for your to experience the same thing. Life full of great things, with your short time here on earth enjoy the experiences and share them with others!

My dad would have been one of the most prepared people for the COVID-19 pandemic. Long before it become popular to hoard hand sanitizers, paper towels and toilet paper he was doing it! I grew up with large shelves full of these three products along with cleaners and plenty of yellow tablets. This might not be a deep life lesson but when the pandemic hit, our house and offices had plenty of hand sanitizer, toilet paper, and paper towels. You never want to run out of these!

My dad would always say that being sick was 90% mental and 10% physical, which even when cancer took his life he still believed. He always believed that having a PMA or “Positive Mental Attitude” was not only a key to happiness for yourself but is infectious and spreads to others.  He always brought a smile and energy to everything he did, and it showed in those around him. He had trials and tribulations that set him back and there were times where he didn’t have his positive mental attitude as we all experience, but by in large one of the traits that propelled him and rubbed off on me is always have a PMA. You can control a lot more of your reaction than you realize. Have zeal for life!

9. Always have a little WAM

My dad was quirky, passionate, and memorable. He was his own person for better or for worse. I more from him than any other person in my life and I hope these lessons show you that you can be you and still impact people’s lives because more is caught than taught!